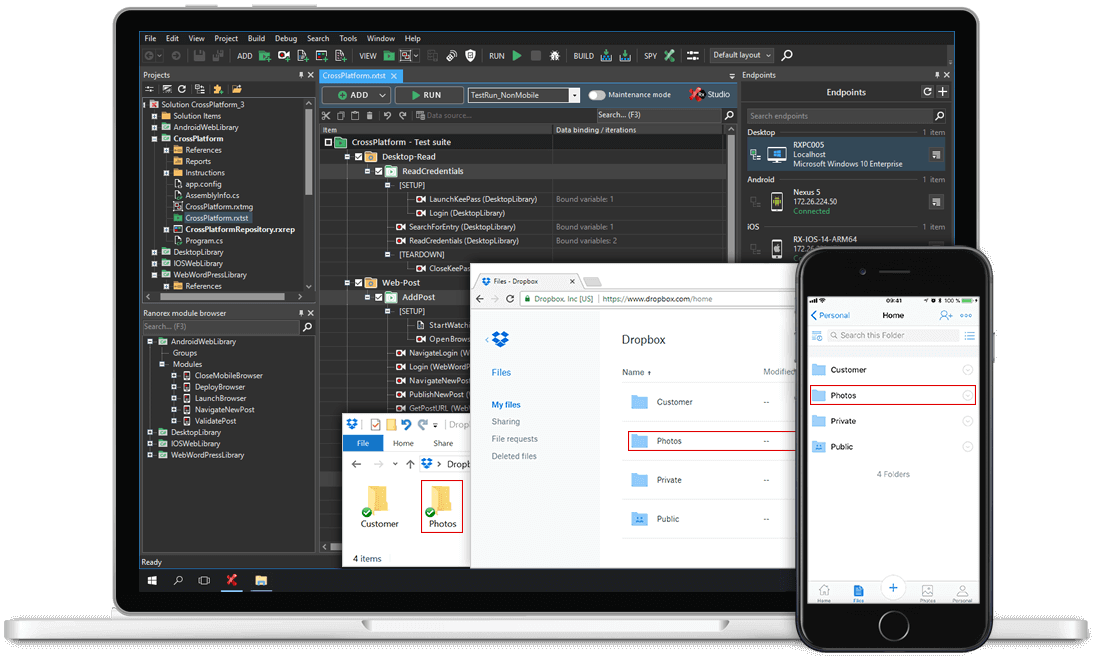 Ranorex is easy-to-use test automation software for developing and managing projects in teams made up of both testers and developers. A step-by-step wizard helps you to set up the test environment and quickly get started. Non-programmers can use the script-free drag & drop functionality, whereas professional programmers can use an API for C# and VB.NET to enhance their test suites and recordings.

GUI Object Recognition
Ranorex's matchless GUI recognition covers all requirements in terms of accuracy and unique identification. It's okay if your button's shape or color changes... Ranorex will recognize and find your element anyway.

Early Bug Finding
The little troublemakers that are hiding inside your code don't have a chance. Ranorex's bug tracking feature and click & go test reports will help you to get rid of annoying and time-consuming bugs.

Seamless Integration
Maybe you're already using a continuous integration system or working with a test management tool? No Problem. Ranorex works with a number of different tools.

Record, Pause & Play
Recording tests is that simple! Just press the record button, start your testing and Ranorex remembers all of the steps. Delete redundant steps with an easy-to-use editor.

Platform-independent web testing in grid environments.
As we've optimized our Selenium grid support, you can easily distribute your tests across different operating systems and browsers to maximize testing efficiency while minimizing your time spent on testing!

Added support for JxBrowser 7.1 and newer
The Android service app now selects a free communication port automatically in case the default port 31000 is already used
Added a Chrome plugin setting to specify if the “force-renderer-accessibility” flag is passed on instrumentation
Updated the API documentation design and added an introduction page
Changed the numeric drop down for the image similarity settings to show 5 decimal places (instead of showing just 2)
Upgraded iOS RxBrowser application to use WkWebView (instead of deprecated WebView class)
Added new capability for iOS UISegmentedControl controls providing attributes SelectedSegmentIndex and NumberOfSegments

Improved connection state management for Android endpoints
Fixed an issue with proper recognition of deprecated android.support.design.widget.TextInputLayout UI elements
Fixed a bug where the WinForms Core plugin would silently throw NREXs causing some controls to not be recognized
Fixed a bug in the Magic Merger where test suites with missing data bindings would not be merged correctly in some cases
Fixed an issue where recordings would be marked as dirty when changing the “Clear Cookies” property
Fixed a bug where deleting multiple validation screenshots from a repository would cause an exception
Fixed screenshot scaling when opening snapshots created on a system with different display DPI values
Fixed a NREX caused by the Coach notification popup
Made sure to only email the report for the currently executed test suite when using the EmailModule module from the Ranorex Automation Helpers in a sequence of test suites
Fixed a bug where copying an action to a recording with a different repository would cause an exception
Fixed a possible NREX in the data binding pad when closing a recording view
Fixed an exception that could occur when the code completion window appeared while editing a condition for a breakpoint
Fixed code generation for multi-line recording descriptions and action comments
Fixed a NREX when editing a variable in the Watch pad while not debugging