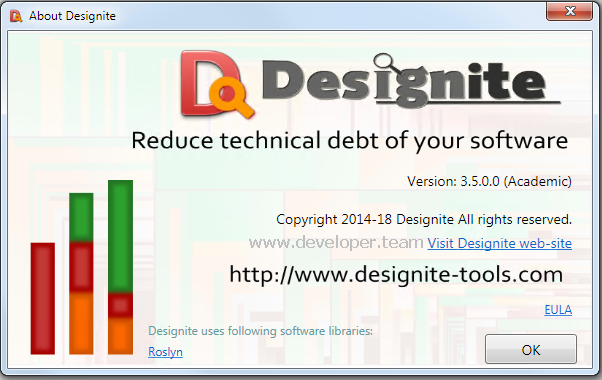 Designite is a software design quality assessment tool. It analyzes C# codebase and detects a comprehensive set of architecture, design, and implementation smells. Currently, Designite supports detection of 7 common architecture, 19 design, and 11 implementation smells. Designite computes more than 30 source code metrics to gauge the structural health of a software system. Designite offers a rich set of visualizations for software developers, designers, and architects to visualize various issues affecting the maintainability of their software. These visualizations include sunburst diagram for showing detected smells, treemap diagram for visualizing the distribution of smells in a codebase, and a pie-chart of the metrics for holistically visualizing the state of the code from a specific metrics point of view. Additionally, the tool supports detection of code clones, prepares DSM (Dependency Structure Matrix), and performs trend analysis showing the number of smells remained, refactored, and introduced in a new version from its previous version.

The following architecture smells are detectable by Designite:

2. Detect Design Smells
Designite detects various design smells in your code to help you manage your "design debt". Designite identifies design smells and presents them in a view that classifies them based on the fundamental principle they violate. In addition, Designite also points out the cause of the smell and therefore provides a clue towards refactoring of the smell.

4. Analyze Trend
Designite supports "trend analysis" to reveal the evolution of software from the smells perspective. Specifically, the trend shows how many smells (both design and implementation) have been introduced, remained, and removed from one version to another. It is useful when the development team wanted to observe the quality of the software, especially after a refactoring cycle.

9. Console Application
Designite provides a console application with various options to allow integration with external tools. For instance, one can integrate Designite with SonarQube to see the design smells detected by Designite in SonarQube. The new console application not only supports previously supported functionality (analyze projects and export results in MS Excel, XML, or CSV formats) but also allows a user to carry out trend analysis with a rich set of options.

10. Customize Your Quality Analysis
Every piece of code is different in terms of domain, context, and its quality requirements. Measuring quality aspects of all the software systems using the same stick is not appropriate and often not desirable. Keeping it in mind, Designite has introduced a new feature "Preferences" in version 1.33.0 to allow users to customize their analysis by selecting thresholds based on their context and requirements.

11. Identify Hotspots
The hotspot analysis assigns a "Hotspot score" to each class based on the detected design smells in the class and highlights the classes that you may choose for refactoring first.

12. Export Results
Designite allows you to export the analyzed information (detected smells and computed metrics). Three export formats are available to choose from: MS Excel, XML, and CSV. This extremely useful feature allows you to share the result of the tool with other stakeholders in your team and analyze the results further.

Which problems can be addressed using Designite?
Identification of architecture, implementation, and design smells. Refactoring these smells improve the maintainability of the software.
Monitoring the quality of software by employing trend analysis.
Interactive software design quality analysis by using the provided visualization and comprehension aids
Refactoring guidance based on the kind and number of smells identified in a piece of code