Telerik UI for Silverlight includes a wide range of controls from small UI components such as Rating to powerful data-driven controls like GridView. The suite provides a variety of data visualization tools which allow you to display and edit your data in many different ways. Manipulate your row data in a GridView or Spreadsheet and then visualize it through PivotGrid, or any of the other charting and diagramming tools. Choose from a number of components for daily or business planning such as ScheduleView where users can easily plan their day and GanttView which allows users to visualize and manage any project planning data. Telerik UI for Silverlight comes complete with customizable UI controls for a variety of needs and options, which makes it the ideal choice for any Line of Business Application.

Before universal apps came along, creating apps for Windows 8.x Store and Windows Phone 8 was mostly a two-app project. Thanks to the universal Windows paradigm across devices, developers write code once and deploy on multiple Windows platforms with just small tweaks on the user interface. Telerik UI for Windows Universal plays nice with Microsoft Visual Studio and creates a Shared project template for Universal Apps allowing the same app to be written for Windows 8.1 Store and Windows Phone 8.1 with little code changes.

The TMS Security System facilitates the definition of user rights on a menu or form level. In its user management features the TMS IntraWeb Security System relies on user/group profiles stored in a database. The users can be grouped and can inherit rights in this way. Thereby you can integrate a highly sophisticated and close grained user management that closes all potential loopholes via shortcuts with minimal effort. Only if the user has been granted the specific right by the administrator he can see or use the specific function assigned by the administrator. 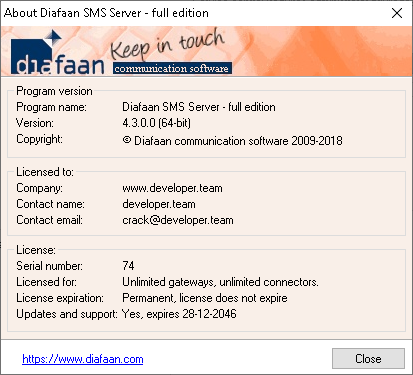 Diafaan SMS Server full edition is a powerful SMS platform for 3G/GSM/CDMA modems, HTTP SMS services and SMPP accounts. This edition has no limits on the number of 3G/GSM modems, SMPP accounts or HTTP based SMS services. It is the perfect solution for projects where you need to apply multiple 3G/GSM modems. Diafaan SMS Server is an SMS gateway for Windows that makes it easy to send and receive SMS text messages from and to a web browser, web server, email, SQL database or C#/Visual Basic .NET script.

Creating apps to fulfill your business needs shouldn't be hard. And yet the traditional process for building applications involes a whole lot of work to put together frameworks, build up infrastructure, and compose forms from scratch. Put your time to better use by building your apps with the best app builder.